March 2005 / Paris, esplanade of the Panthéon 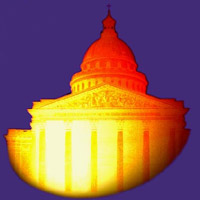 This scenography was commissioned by the Institut Curie to inaugurate « A Garden for Life, a Daffodil for Curie », a fundraising weekend in aid of cancer research. This multi-channel spatialised sound performance took place on the esplanade of the Paris Panthéon, with a light show, designed by Zelda Georgel, projected onto the Panthéon facade.

The performance was designed using the most striking images from a century’s history of radioactivity. The story retraces the discovery of radium by Pierre and Marie Curie in 1898.

The Path of the Five Senses 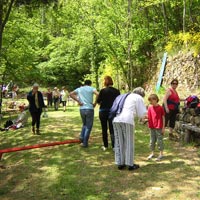 The Path of the Five Senses, Chazel en Boutières, Ardèche

Based on an original idea by Guy Chambon and Alain Bron, The Path of the Five Senses, is a 12km walking trail that loops around St Christol en Ardèche, where the discovery of different sites is enriched by artistic halts, fine arts, photography, music and literature, on a given theme.

The musical scenography, in multi-channel diffusion, varies each year depending on the chosen theme.   The Path of the Five Senses is free to all and attracts 3,000 visitors annually.
http://alainbron.ublog.com/alain_bron_auteur/2008/03/le-chemin-des-c.html

Variations from one shore to the other 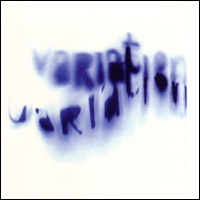 Variations from one shore to the other - Paris, Pantin, Bobigny

Combining creativity with a reflection on the place of art in the public space and on travel within the city, Variations from one shore to the other offers a chance to discover and experience in a different light, the scenery, spaces and places of daily life through the fresh eyes of artists: choreographers, electroacoustic composers, directors, sculptors and photographers.