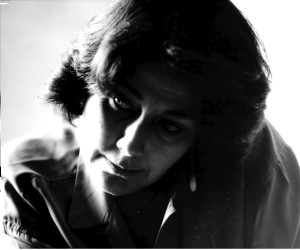 Christine Groult composes music for concerts, music for the theatre, for choreographies and documentaries. Her work proceeds from an attempt to express emotional realities. She is particularly interested in the poetic potential of sounds (recordings and their transformations) and in novel dramatic sound effects.

Electroacoustic music is her mode of expression. As the KM music group(Kairos Music) in Pantin writes : » This form of composition evolves an indoors sonorous subject matter which creates meaningful images with a connective capacity.She is on the same wave length as the plastic arts and the way they treat matter and space . She lends herself to the construction of unprecedented forms, either alone, or in an active interdisciplinarity with all experimental researchers.The diffusion of her music via an orchestra of microphones enables her to avail herself of all sorts of places, staging »in situ » real « sound shows ».

Thus, since 2003,Christine Groult has staged musical scenographies « in situ » . Her aim is to go towards the public in places which lend themselves both to the imagination and to the evocation of real life. Through overtly visible sociological,historical, geographic or architectural elements she tries to conjure up another sort of reality as though what is visible testified to an invisible reality that bestows upon it both content and form.

Christine Groult is the Coordinator of the Department of  Music Composition at the Pantin Conservatoire, France. She is also Professor of electroacoustic composition and Head of the Electroacoustic Studio since 1990.

Pantin Conservatoire’s Department of Electroacoustic Composition has a long-established reputation that attracts both French and international  students. The Electroacoustic Studio was founded in 1972 by Fernand Vandenbogaerde in the context of the Pantin Conservatoire of Experimental Music, created by Michel Decoust. In 1980, under the direction of Sergio Ortega, Steve Srawley took charge of the Studio. Christine Groult has had responsibility for the Studio since 1990.

Today the Studio has twenty students. It offers a curriculum in electroacoustic music composition covering three course levels for beginners and an advanced programme. The class is open to all, musicians, but also to other fine artists, dancers, sound artists and technicians – to all those with a passion for sound who wish to learn, to play, to invent and to create. This diversity is an important factor in the dynamism of the class.

A performance space, equipped with an acousmonium, hosts master classes, concerts by students and internationally renowned composers, throughout the year. Thanks to Sergio Ortega, Director until 2003, a special tie exists with South America and Spain. Numerous exchanges have taken place with the lively electroacoustic community in Chile, Argentina and Venezuela.